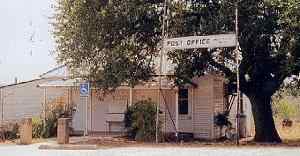 According to the Handbook of Texas - Hext was settled in the 1870s and was known by the name Maringo or Merrengo. It was renamed in the 1890s for one Joseph Robert Hext. The post office was established in 1897 which made the name permanent.

Hext hit its high-water mark about 1914 when it reportedly had 125 people, a cotton gin, a hotel and two general stores. The estimated population was 40 in the mid-20s and after WWII it rose to about 60 where it remains today.